Edit: Thanks to Gizmodo to pointing to our article. You guys know a good lead when you see it! 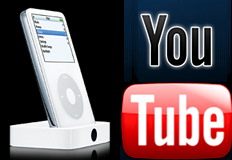 Obviously Apple and Google are the best of buds these days. There seems to be no end to the sharing that’s going on between them. With the torrent of rumors that are exploding all around the web and the announcements sure to come at WWDC, I have been wondering, “why no YouTube on the iPod/iPhone rumors?” I mean what two amazing technologies were ever better suited to each other?

Youtube, which Cupertino announced will be on AppleTV, is in the process of turning their WHOLE video collection over to H.264 video.  Do you have any idea how many CPU cycles that is?  Probably enough to raise the temperature in San Francisco a few degrees.  All for the AppleTV?  I mean its just another hobby for Apple according to Steve Jobs and a bit of a flop according to retailers.

But we know Apple loves using Google’s APIs to make insanely great apps for their products.  Just look at that GMaps app on iPhone!

5G iPods and iPhones do.

And there are more than a few of them running around.  What better way to monetize all those trillions of videos running around out there on YouTube and Google Video?  They’ll likely work out a subscription plan or a advertizing-based daily podcast that’s built into iTunes.  Oh wait!  Youtube is already built into iTunes…

EDIT: It looks like MacShrine is also reporting on this possibility but with some more specifics.