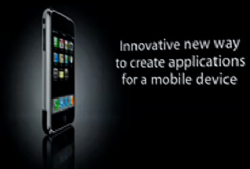 Taking a page from their ipod shuffle campaign that touts the limitations of not having a screen on an MP3 player as the newest and greatest thing, Steve Jobs tried to convince a auditorium full of developers and a global community of 950,000 that they would in fact have a very advanced Web 2.0 iPhone User “SDK” (software developer kit) or lack thereof…

..or, in other words, a browser

Which we’ve all known about since January.

Yes it is a very nice browser.  Safari supports most CSS and web standards very well.  It also is now on Windows…hoo-ahh!  The iPhone Safari also does some nice zooming and panning and has some nice features.  It might even make the iPhone for Business possible.

But it is JUST a browser

……..When did Steve Jobs turn into Karl Rove?

and therein lies the problem…that this message is just SPIN.  The same message could have been relayed by saying this:

No, we aren’t letting anyone into our iPhone development for the foreseable future, our platform is too delicate, AT&T won’t let us and we haven’t quite set up the proper security restrictions for an API.  We may in the future…or we may not.  It does browse the web though.

So that is the problem here.  Every religion/political party/NGO/etc has their mantras and their view of situations – and specifically how to view a bad situation.  So let’s make no mistake about it..

Apple is telling all of its developers at its yearly World Wide Developers Conference, that its biggest product in 30 years will not have a dev kit for them but instead they should build webpages is a BAD situation.

But now I am sitting here knowing I’ve been SPUN and as a natural reaction, I am looking at the rest of the picture and wondering what else have I got at this WWDC? 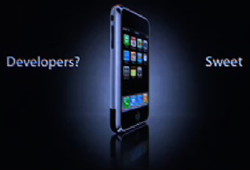 So what am I supposed to be getting excited about again?

In reality, Apple PR should really be advised not to let the SPIN cycle get out of control.  Especially at the WWDC.  I mean yeah, most of the people in attendance are rabid fanboys, but these particular fanboys are also smart, technical and know when they are being spun (some of them anyway).

Here’s a suggestion in the hypothetical senario where this would happen again:

Today we are announcing that we aren’t providing a SDK for the iPhone?  Why?  Because it’s a phone and not a computer.  The tolerance for freezing, looping, “pinwheels” etc. for a phone is extremely small.  Also, this is a first edition and there is just enough memory and RAM to fit the things we already have built.

The good news?  This is a platform is the same as the rest of the mac lineup and in a year we’ll be on a processor as fast as a current mac Mini, have quadruple the RAM and more room to maneuver.  There will also be faster data speeds and a larger userbase.

In the meantime use AJAX webpages to interact with this phone and its computer-like browser, that’s all we can give you at the early stage of this product’s lifecycle.

Keep in mind that I am a huge fan of porting apps to to the web whenever it is possible and I don’t necessarily think that the iPhone being a closed platform is a bad idea. It is just insulting to be SPUN and detrimental to the rest of the message (WWDC). Let’s leave the “We are harvesting the forests” to the politicians.