AT&T Activates Only 150,000 iPhones During First Two Days – What Are People Waiting For? 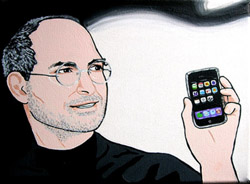 I am not sure if this is bad news or good news. The Street (AAPL down $4 on news) seems to think it is a bad sign as some analyst were pointing at first weekend sales to be anywhere from 400,000-700,000 units. It just goes to show you how much these guys really know – nada.   I wonder what their metrics were?

More than likely however, this is just clearing out the irrational exuberance.  150,000 untested iPhones is a lot in two  days and who knows how many more were signed up for AT&T in the following days.  There are plenty of people waiting in the wings for a iPhone.  What are the waiting for?

So what are you waiting for?