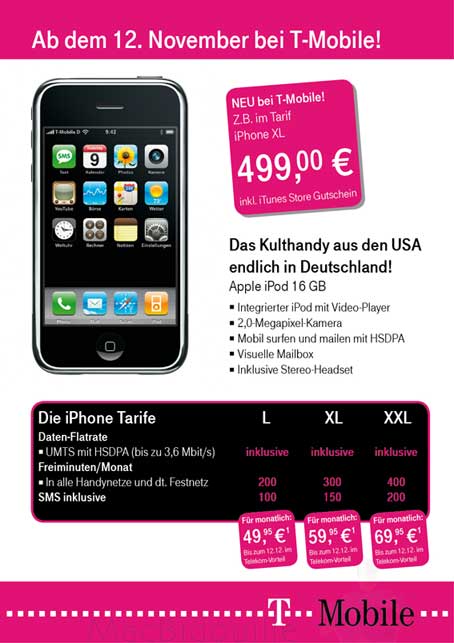 MacBidouille, an excellent French-language Macintosh site, has posted what they say is a leaked advertisement for the Tmobile iPhone in Germany.  Of note, the specs indicate 3G speeds and a 16GB capacity.  These specs are in line with our reports from August from our Orange (France Telecom) sources.   They also stated that the Germans and British would get the iPhones slightly before the French were ready to roll it out.

While this image could easily be a fake (they at one point call it an iPod in the advertisement), the specs are likely to be realistic as the next iteration of iPhone will likely match the iPodtouch‘s 16GB capacity.  Additionally, with 3G phones all but ubiquitous in Europe, it would be an embarrassment for Apple to release a EDGE-only phone.  The price point also make sense when one takes into account the Euro/Dollar exchange rate and the absurd VAT Tax rates that add close to 20% of the cost…  There has still been no mention of possible GPS capability.

We are still looking for an announcement at Apple Expo in Paris in late September to give European consumers some lead time in preparing to switch mobile carriers and make a fairly large purchase.  Even if agreements have been reached (and reported on by the Financial Times) the carriers will likely be forced to leave the announcement to Apple.