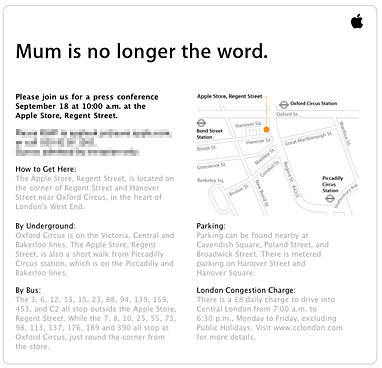 It looks all but certain that Apple will announce its first European iPhone carrier next week.   And some bad news for y’all across the pond (or Channel as it were), it is not going to be carried by Vodafone who is currently launching an iTunes competitor (and whose CTO recently publicly dissed the iPhone).  It will most likely be carried by O2 only.

It remains to be seen what effect, if any, the recent iPhone hacking will have on the selection of iPhone carriers.  Apple will probably have to secure its iPhone OS from these hacks if it expects to keep exclusivity contracts with the vendors going.

Apple will save its Continental Europe announcement for Apple Expo in Paris where it will announce deals with Orange and Tmobile.

Apple is expected to announce 3G iPhones with 16Gb of storage at some point but next week’s announcement might be too soon for those features.   Perhaps Apple will only announce it’s partner next week and save the specs for Apple Expo?