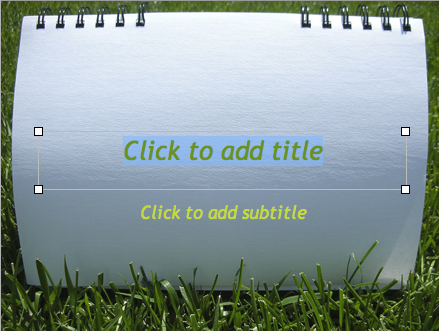 Google today announced their Online presentation application. It isn’t going to win any awards for beauty (baaad templates!) and it is next to useless in the Safari Browser – much better in Firefox – but it is a huge step in the right direction.

The chat and collaborative features in Google Docs and Spreadsheets are there which opens the possibility of online presentation building and “presenting.” However, it has obvious downsides as well.  It is certainly not as full featured as current presentation tools like Powerpoint and Keynote.

So back to industry implications.  It certainly may help break up the Microsoft monopoly on office software (not that Powerpoint was anything impressive) and makes the OS a bit less important.  It really doesn’t effect Apple’s Keynote too much because Keynote’s audience is the aesthetically capable and Google is promoting a bare bones solution (at least now).  It will certainly hurt Zoho Office’s offering.

Really, though, we are waiting for Google’s Wiki tool to come out.  They bought Jotspot like 200 years ago – what are they waiting for already?!  Is it us or is Google’s innovation machine slowing to a crawl?