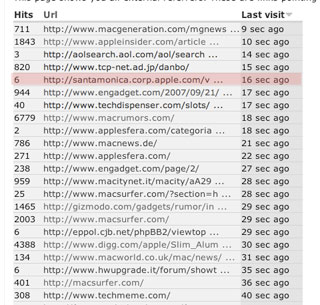 Every once in awhile we like to go through our logs here and see where our traffic is coming from.  Ususally it is the same sites but sometimes we stumble upon something interesting.

A few months ago, we noticed we were getting a lot of traffic from “santamonica.corp.apple.com”.  At the time, I did a Google search and noticed nothing came up.  Strange.   One would think it would come up in someone’s logs out there somewhere or some webmaster would come across it somehow.   Recently it has come up again a few times.

We then checked DNS and found that there was no name resolution for this particular site from Apple’s domain servers.  Specifically We got this error:

[ERROR: The parent servers say that the domain santamonica.corp.apple.com does not have any NS records (although they may have some other information on that zone). We can not do a DNS report on a hostname (such as mail.example.com) or a domain name that does not have its own zone.]

We get a lot of hits from the 17.x.x.x namespace (Apple’s Own Class A Subnet) and we pay particular attention to where they go on the site – especially how they vote on the polls ;-)

So the question begs to be asked: What is santamonica.corp.apple.com?  Our guess is that it is some sort of internal Intranet that get’s loaded with Apple news around the web.  It could also be an internal webmail system where people get emails to sites and click directly from their browser.  It might also be a web based news reader in beta?

Anyone have any ideas?

Edit: One of our sources thinks that it is an internal Apple Press Intranet site that pulls the digg.com/apple RSS feeds (amongst many others).  Still…interesting. Why “santamonica”? Apple doesn’t have any big offices there?  And if they did do they have a webserver that links to us?

Also a commenter points out that santamonica.corp.yahoo.com DOES get a lot of hits on Google….perhaps Yahoo has built this Intranet?