Amazon Store is Beginning of the End of iTunes Dominance 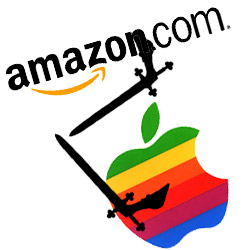 Yeah we said it.  It needed to be said.  iTunes, you’ve finally met your match. All of the iTunes competitors to this point have been extremely flawed in one way or another but one company that understands consumers as well, if not better, than Apple is doing it right.  As Apple fans, we hope this rattles more than just a little bit the cage that is the iTunes music store.  In fact, until things change at Apple, we are onto Amazon.

Amazon is basically selling what AllofMP3.com was selling to consumers, but legally and more  (realistically) expensively.  That price will probably erode over the next few years as competition and flexible pricing mature.  All good for the consumers.  We can only hope that videos and movies follow.

Apple had better get its act together quickly or it will a be relegated to the same 3% rabid fanboy market share in the music sales industry that it garnered during the PC wars.  Hopefully they’ve learned their lesson by now.  But all signs point to “no”.

EDIT: TUAW has a great review of the 2 systems