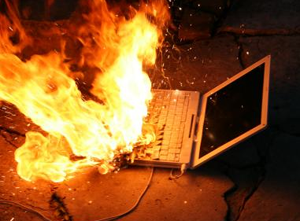 I don’t think I can remember an Apple move that provoked such strong, yet universal negative feedback from the press as the iPhone Firmware update 1.1.1 is receiving. While there are always Apple rabid fanboys that would cheer on Steve Jobs as he robbed a bank, the more objective press and readers around the world have all voiced their negative opinion of the iPhone lockdown move included with the 1.1.1 update. Some sources have indicated that Apple’s update might even be CRIMINAL in its purposely "bricking" of anySIM opened handsets. While Apple has mostly covered itself in its licensing agreements and with public notices about the effects of iPhone 1.1.1, this move – likely forced by its agreements with AT&T, is a public relations nightmare and could do more to hurt the Apple brand than anything since Steve Jobs retook the helm, 10 years ago.

These are the press companies that are usually nudged to give Apple good reviews lest they not get advanced looks at the latest equipment, invited to Apple press events and be the benefactor of Apple’s advertising spend. Extremely strong words. Who got to do the early reviews of the iPhone? Why?

The grand total of the 1.1.1 update is this: you get mobile iTunes STORE (you already have 99% of the iTunes desktop functionality in the iPhone iPod.app). You get some user interface tweaks which aren’t going to change your iPhone experience much. The negative – you lose access to all of the developer apps and sim unlock. While this is only going to effect the small minority (under 10%?) of iPhone users that unlocked their phones and put applications on it.

What is different about this is Apple’s malicious intent on their customers. Apple’s update doesn’t just invalidate the SIM card which, in itself, would have been enough to infuriate most users – it Bricks their phones. Let me say this again so it sinks in:

Is it legal to install other applications or to unlock your iPhone? Yes.

Is it legal to use another SIM card from another carrier in it? Yes.

Did Apple know that its "updates" would destroy iPhones that were being used on other networks? Yes, it most certainly did. Various independent reports conclude that Apple is knowingly and purposely bricking its own phones. Whether this is able to be proved in a court of law is questionable.

A lot of people are going to say that "you bought it and the license agreement said not to mess with it and you did so now you deserve to lose your money" or the ever popular "IF you put a Chevy engine in your Ford truck don’t blame Chevy if it don’t work right idjit". Yes of course we knew we were voiding our warranties when we hacked the iPhone. Like most people savvy enough to hack into their iPhone, we were also savvy enough not to take Apple’s Bricking software. This doesn’t make it right.

Why is Apple doing this? It is most certainly to enforce its agreement with AT&T and to assure it’s European telecoms partners that it can lock its customers to the networks that pay a royalty fee (10%-30% of the talk, data and sms bill depending who you ask). I say royalty fee because Apple, for this fee is not providing any type of service to the customer in exchange for their monthly charges. One could argue (and no doubt, Apple’s lawyers will at some point be made to) that the Visual Voicemail feature on the iPhone that Apple worked on with AT&T could constitute a feature and rationale for the extra fees. However, I don’t think Apple’s PR is set to announce this any time soon.

And that is just it – this isn’t really about legalities. It is about public perception. It is about the Apple brand and the brand loyalty of its customers. Apple’s brand is without a doubt, its most valuable asset. Apple certainly has a bright short term future with its lead position in the digital entertainment revolution, however its high stock price is by and large a function of its brand.

Consumers in this category like to think they are in charge. They want freedom or at least the illusion of it. It isn’t Apple cool to have to follow the whims of a big corporation that is in fact acting as a proxy for AT&T. (and in other matters for the record labels)

Nokia, for one, is taking full advantage of the lock down perception that Apple is throwing off. Their new N-Series Open campaign was launched today and seems to be grabbing a lot of positive attention. The reality is that their devices don’t really hold a candle to the iPhone on most fronts. They also sleep with the carriers as much as Apple is currently doing.

These latest actions that Apple are promoting are hurting brand in a way that will not be calculable in certain terms. However, to see the technology press so unequivocally and wholeheartedly bash the media darling surely must be cause for fear in Cupertino. This will take more than a $100 gift card to remedy.

Edit: This was posted before editing…more sources of negative publicity added as well as some vulgarities removed. Please return to flaming away!