What's on your iPod? 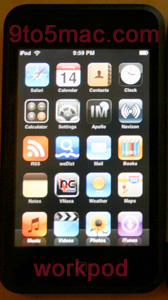 So it looks like just about everybody is able to hack their iPods now. The hackery started last week with some rogue .tif exploit jailbreaks and has progressed from online guides to a full gui crack. Even non-Erica Sadun TUAWers (man we missed stuff like "Wanna set your iPod touch free and install tons of wacky apps on it but don’t want to muck around with the Terminal" from TUAW) are getting in on the act. The application is called iJailbreak and it does all the mukking for you. If you are a Windows user, head over to TouchFree.

So, now that the hack is most definitely mainstream, we want to know what people are putting on their newly cracked iPod touches.

In fact, remember way back when Apple had the "What’s on your Powerbook?" campaign? (refresher) Well now that everybody who is anybody is hacking their iPod Touch, we thought it’d be fun to bring it back.

Flash to the guy with a tie...remember him? He was doing CRAZY stuff with Filemaker. Now fast forward fifteen(!) years. We’ve put together a business focussed iPod and are donning it the “WorkPod” because it only has “Suit and Tie” Applications. We’ve even been good worker bees and deleted YouTube. See the picture?

Here is Suit Guy’s "What’s on Your iPod":

Not to mention the included Apps:

Not too shabby – if you have an iPhone you could certainly add more like the Voicenote.app. With a list like that, maybe we can get finance to buy one of these for the office?

What’s on your iPod?