So doing the last post, we had to do some research on Shaw Wu an Analyst for American Technology Research who had made a bad call on the numbers of iPhone unlocking. Thankfully, MacRumors has put together a list of Shaw’s predictions and their subsequent  "truthieness".  He’s riding about 15% correct…which is like picking horses at the track based on their names.   Given all of this, he has a 4/5 star rating from Yahoo and many people make investment decisions based on his guidance.   Some of the better ones (from Macrumors):

Its unfair to call out just Shaw.  Looking at the list of Analysts for someone who might have a clue yields very little.  Even Gene Munster (Piper Jaffray) whose full time job (and huge budget and crew of at least 4) it is to gather information on what Apple is up to, is not even 33% right.  Even worse, most of his "correct" "information" is weeks behind some of the better Apple blogs – like Appleinsider, Ars Technica, and MacRumors.   Heck, we even call a thing or two right once in awhile.  His numbers for the iPhone sales were way too optimistic – all of the smarter blogs knew that (Gizmodo, Engadget, etc.).

These are the same guys at the Apple sales calls that ask the same stupid, meaningless questions when given the chance to get information out of Apple.  For instance, Apple almost showed it’s hand in regards to the AT&T kickback pricing.  They stated that:

Total revenue recognized during the quarter from sales of iPhones, iPhone accessories, and payments from AT&T was $118 million.

Damn!  You know the price of the iPhone (generally).  You know the amount they sold.  They are giving you two more variables and a sum.  ASK HOW MUCH REVENUE FROM IPHONE ACCESSORIES!  It is on a piece of paper right in front of them.  If they give that you you, you know the AT&T kickback amount. 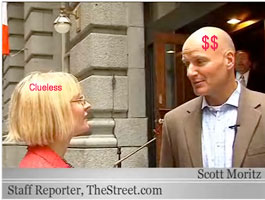 Nope.  Nothing.  Wasn’t someone taking notes?  So we are still guessing.

These "analysts" who work for huge Wall St. firms have huge budgets to do large amounts of research, take polls, time/ travel money to network with Apple employees, suppiers and contacts, yet can’t come up with one bit of credible information.  Nearly all of them strike out all of the time.  It is uncanny.

Of course these guys have been at B-Schools and investment banks behind IBM Thinkpads their whole life, listen to music on the Hifi, not over wifi and have absolutely no idea about anything related to the Mac culture.

They also tend to give broad generalizations like one of Gene Munster’s latest:

Billing the subject its "Hot Topic of the Month," investment bank Piper Jaffray said Monday it believes there’s a "high" likelihood Apple will announce an ultra-portable Mac sometime in the next 4 to 6 months.

"The move could take place in the form of an smaller laptop and/or a tablet device using the iPhone’s multi-touch technology," Sr. Analyst Gene Munster explained in a report issued to client investors. "Although we do not have firm evidence, either product would be a strategic extension of Apple’s current technology base."

So basically Apple MIGHT release a device between a macbook and iPhone in size within a half year.  That’s pretty bold.  How could they not?

Also, there is the case of Scott Moritz from TheStreet who basically read recent blog intel verbatim and blindly guessed that new Macbooks would be released next week (don’t worry they are still coming).  Many people think that Scott and others at TheStreet are shorting Apple stock and making quick cash on their public rumor-mongering.  So much for TheStreet cred.

So the point we are trying to make here is this:  Hire us!  We’ll give you much better info than your current analysts.  If not that’s cool, keep visiting our website.  We might throw a few Google ads your way but at least you know we aren’t shorting Apple and trying to make a quick buck off of investor ignorance.