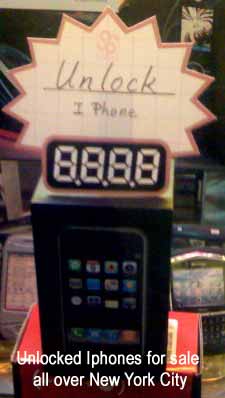 Engadget this morning pointed us to the news that Apple was now only selling iPhones to people with credit cards – no Cash/Check money order.  In addition, the limit on phones is now down from 5 to 2 per purchase.

According to Apple spokeswoman Natalie Kerris, the official Apple Line is, um:

"Customer response to the iPhone has been off the charts, and limiting iPhone sales to two per customer helps us ensure that there are enough iPhones for people who are shopping for themselves or buying a gift," Kerris said. "We’re requiring a credit or debit card for payment to discourage unauthorized resellers."

YEOUCH!  The 1st 1/2 of that statement would seem to be untrue – there are plenty of iPhones out there no one is complaining of store shelves being bare – in fact, Apple will have to ramp up sales (Europe/Asia help) to meet its 10 million by the end of 2008 forecast.

The second half is a bit more genuine.  Apple has a very real problem with unauthorized resellers.

We’ve been saying all along that iPhone hacking isn’t just a niche market devoted to crazy hackers.  Here in Paris, SIM unlocked iPhones are all over the place.  London too.  The plummeting Dollar has made an Apple Store visit a requirement for every iPod loving European over the past few years.  Now, iPhones are on the shopping list.  My wife has been hit up numerous times for iPhones on her current trip to New York (hehe).

So what about the MBA’s at Apple who came up with the revenue sharing plan?  They are obviously falling all over themselves trying to correct course with things like the 1.1.1 (codename: bricksville) update and this current plan – which will surely stop the problem…  Seriously though (see picture – this isn’t going to slow), it is kinda getting scary – the lengths to which Apple is willing to go to to keep people from changing carriers – one shutters to think of what happens next.

What about the analyst’s predictions?  Hacking was not a concern for Apple?

Shaw Wu of American Technology Research described the number as "immaterial," representing "only a small group of users, namely hackers."  He is 100% wrong – yet again (who hires/listens to these guys?).  The phone hacking IS a problem for Apple.  The recently announced quarter of a million SIM unlocked iPhones was probably a low "guess".  We use quotes because Apple knows the exact number.  How?  Take Apple’s iPhone total sales, call AT&T ask their total iPhones activated, then ask someone in finance to subtract one from the other.  That’s how you come up with your "guess".

Apple is probably dealing with about one in five of iPhones getting hacked (geeze – look at our Google ads if you don’t believe us!). That is pretty significant – especially if it continues to grow.  As the practice becomes more "accepted" and mainstream, more and more people will jump on board.

Obviously, not only is Apple losing their cut (10-20% of iPhone owner’s wireless revenue over 2 years), but AT&T is not pleased.  While most of these phones are heading to Canada/overseas, many more are being used in the States on Tmobile or on AT&T without the 2 year plan.  As we’ve said before, hacked iPhones are blanketing Europe ahead of their official (more costly) release next month.  The O2s, Oranges and T-mobiles have got to be getting pretty pissed off and want to see some action…schnell!

Hence, today’s action.  Apple, you know you could just call the whole thing off right?