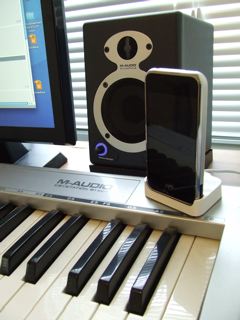 Edit: This is the first in a series of four articles on Battling iPhone’s GSM Buzz. A solution to this issue is described in the fourth installment.

I wanted to share this experience with the  9to5Mac readers, because I thought that many of you might be in a similar situation. Like many happy new iPhone owners this summer, I immediately set up my iPhone dock on my desk and plugged it into my Mac. I’d had a GSM phone before, so I was well aware of GSM buzz. My old T-Mobile/Nokia rig would drive my crappy Logitech speakers nuts in the seconds before I would receive a call. It was never much of an issue, though, because unlike the iPhone, I charged the Nokia phone in the other room, away from the computer speakers.

As you know, the iPhone is different. Syncing and charging require docking the thing, and so the GSM buzz in the speakers is a fact of life when I’m working at my desk. And it seems to occur more often than it did with my old phone (probably something to do with it being docked to a firewire cable, which could be a conduit for the radio signal).

I got annoyed enough with the buzz-buzz-buzz of my Logitechs that I started to look into  properly-shielded speakers. I’ve now learned that the shielding is mostly to guard your display from speaker interference, and has less to do with protecting the speakers from GSM buzz. Here are a few articles that I found helpful in explaining the situation:

And many people claim to have solved the problem with artfully-placed tinfoil:

I find this absurd. I didn’t spend $399 on an iPhone just to have to wrap it in tin foil. In the car, I’ve taken to just using my old iPod for audio, which seems like a good way for it to spend its retirement. But at home, I need a real fix.

I decided that $100 would be a reasonable amount of money to spend on a solution. That gives you a clue about the level of annoyance that GSM buzz causes. The most probable culprit was the $15 pair of  Logitech speakers I bought when my circa 1991 speakers, originally purchased for my first mini-CD player, finally died (RIP).

I started reading about speakers in this range. I knew I wanted a 2.0 setup because I didn’t want the clutter of a subwoofer or satellite speakers in my office. I already have a 5.1 system in my living room. Narrowing it down, the choices appeared to be:

I had found some complaints about GSM buzz in the Bose product, and I was about to pull the trigger on the Klipsch ones, when I started to read reviews of the M-Audio Studio Pro 3. Amazon had them on sale for $89.28, and the reviews of the sound were very favorable. My thought was that a low-end pro-audio monitor would have better fundamental construction and shielding than a high-end consumer 2.0 computer speaker. I also read a bunch of audiophile hate about Bose in general, which lead me to believe that they use their high margins for marketing rather than on research as they’d like you to believe. The Klipsch pair had some favorable comments specifically about a lack of GSM buzz, so I was conflicted, but I rolled the dice on the M-Audio product because it is housed in a “custom tuned wood cabinet” and the Klipsch is just plastic.

I was very pleased to get my “Super Saver” shipment a full 5 days before Amazon projected, and I installed the set last night. It came with a .125” plug for my G5 tower’s audio card that splits into two RCA connectors on the right hand speaker/amplifier unit. Then there’s another .125” connector to the left speaker, and a simple, brickless power plug for the amp. It also came with little wedges that angle the speakers upward, which I deployed immediately because I have another M-Audio product, the M-Audio Keystation 61es Keyboard, and the wedge prevents the back of the keyboard from muffling the sound. Oh, the sound.

Glorious, rich midtones. I never appreciated midtones in a speaker until I got these. I heard detail in the music I’ve never heard on headphones or my 5.1 system. The bass is clear and not muddy, but audiophiles will want a sub (they always do). I also noticed that the high-frequency sound did not appear as painfully loud as with headphones, possibly because they are so well-balanced with the midrange.

Later that evening, as is my wont, I did one last check of the e-mail before bed, and also to admire my new purchase. The speakers were on, but the music was off, and the iPhone was docked. Suddenly, I had about 3 seconds of “bp-bp-bp-bp-bp-bp-bzzzzz” –The dreaded GSM buzz had finally dropped in for a visit. I winced in disappointment. It was quieter on these speakers, and only happened once last night (as opposed to the logitechs, which would dependably buzz every time I docked the iPhone and in pretty regular 5-minute intervals) so I think I’ll spare myself the trouble of repacking the speakers and shipping them back to Amazon. The sound is so good, that I think I can put up with a fainter, less chronic kind of GSM Buzz. But I still have my receipt, so we’ll see in the next few days. I can’t help but wonder how this article would have ended up if I’d chosen the Klipsch speakers, though.

My next course of action will be to investigate the Ferrite beads supposedly available at Radioshack, and see if they help at all. I was able to find one product on their website that looks promising, though I’m not holding my breath:
http://www.radioshack.com/product/index.jsp?productId=2103222

If anyone has a solution to this problem that does not involve tin foil, please post in the comments.