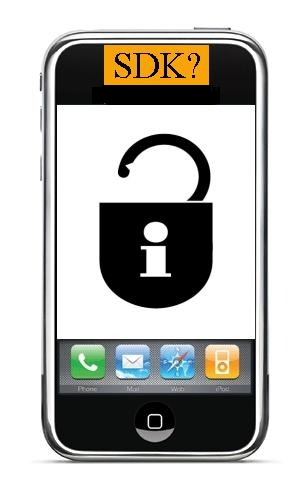 The iPhone SDK is due next month and there is a lot of speculation on exactly how it will all work.  Stevo has said he is fond of the Nokia model and we’ve heard comparisons to the Tmobile Sidekick’s delivery system.

We know that Apple has stockholder interests to protect and will likely take a cut of the cheddar on apps that it delivers.  How picky Apple is about what type of apps get on the platform is another story entirely.  We already know that, for whatever reason, Apple isn’t fond of putting iChat-type of Instant Messaging on the platform.  Whether this is to encourage the lucative SMS services or to save AT&T some terrabytes on bandwidth is not really certain.  The question is whether they will extend this blockage to the SDK.

For instance we know that a lot of VOIP providers would like to be on the iPhone.  Will Apple let this fly?  Doubtful.

Other services like Sling, which could be a competitor to AppleTV might also be in the doghouse.

Some pieces of the puzzle might be starting to come together on the technical details of the system Apple will employ to deliver these developer applications.  The five new apps for the iPod touch were delivered by a system that is likely the basis for the upcoming mobile application delivery model.

…The application download arrives with an .ipa extension, which in reality is a zipped archive of files which is Apples’ common method of application storage for OSX.

As expected everything is encrypted so as not to make things too easy for the pirates. Of course this doesn’t answer all the questions we are itching to find out like…