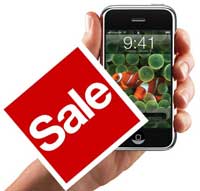 We just got a tip that Apple is planning on dropping the prices again on the iPhone and iPod Touch line within the next month or two – perhaps at the late February event, perhaps as late as mid-April.  Our tipster says that Apple will drop the prices by $100.

Also, the 8Gb iPod Touch will be dropped from the lineup according to the source.  It might also make sense that the 8Gb iPhone would get phased out as well, but it wasn’t mentioned in the tip.  Inventories will likely be a big factor in the timing so we’re keeping an eye out for shortages.

The price drops are likely to make some price spacing for the newer 3G iPhones that are expected to be released later this year – perhaps with the tablets.

The price cuts will also likely spur on iPhone sales which have either been good or bad depending on the week and the source.  iPod sales have been brisk but Apple’s forcasts have been cautious.

Prices on memory have been plummeting significantly since the current pricing model was revealed to mixed reactions in September – six months ago.  Also, admittedly inferior devices like the 32GB Creative Zen have been dropping in price ($299).  While not really comparable to the iPod or iPhone, it does illustrate the  falling prices of flash storage – the only differentiator between iPod and iPhone models.

For what it is worth, Forbes is also advising its readers to hold off on buying iPhones as they think the 3G model is right around the corner.  May?

No specifics were given but the iPod Nano line might also be the beneficiary of decreased memory pricing and might see capacities double in size.

The new prices are expected to be: