On again, off again Manhattan store on 34th St. – On again? 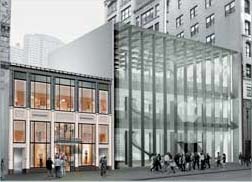 Watch out Macy’s, Apple is moving into 21 West 34th St!  Or will it sublease the space to another tenant?  According to today’s New York Observer, the on-again off-again plans may have finally broken through.  Apple has applied for a building permit at 21 West 34th Street, listing plans for a two-story 19,000-square-foot retail structure on the site, owned by SL Green..

The New York Observer went on to say:

..(Apple) signed a lease with SL Green over a year ago, though in a conference call with investors last year, SL Green executive Andrew Mathias said that Apple is mandated to build something there by the lease, but it may sublease its space.
“We have had some conversations with Apple and they’re exploring their alternatives,” Mr. Mathias said, according to a transcript. “They have not made a formal decision yet either to go ahead and build their building or to sublease the space. They do have an obligation under the lease to build a brand-new building there.”
When asked about the site and why a building permit application listed Apple as the developer, an Apple spokeswoman said that the company has not made any announcements at that location.
An SL Green spokesman, Rick Matthews, did not comment on Apple’s plans beyond the construction, but said SL Green is currently demolishing the site and developing two retail shops adjacent to the Apple parcel.
“Apple will build a store—SL Green will then build and develop the rest of the combined parcel,” Mr. Matthews said.

It would seem likely that Apple is building an Apple Store.

The store would mark the 4th Manhattan location in addition to its other retail locations in SoHo, 14th St., and 5th Avenue locations.  Back in October, ifoAppleStore reported that the store was a go – after hit had earlier stalled.