AT&T (or Tmobile) bringing the iPhone to Canada? 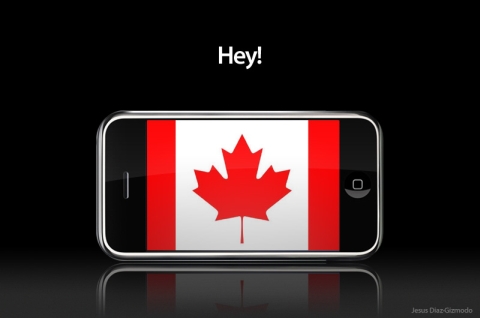 We know Rogers in Canada is a bit of a slacker on the iPhone front from our reader comments.  However, they are the only GSM/EDGE provider in Canada and if you have a hacked iPhone they are your only choice.  If Apple, for whatever reason, doesn’t want to deal with Rogers, they may have one of two already-established partners in Canada soon.  AT&T and Tmobile are both rumored to be partners with Niagara Networks Inc. who are currently bidding on Canadian spectrum.

Either firm may be backing an auction application lodged earlier this month by unknown entity Niagara Networks Inc., which has no current operations in Canada. The company surprised industry observers two weeks ago when it appeared on an Industry Canada list of applicants for the spectrum auction beginning on May 27. Niagara Networks has applied to bid on all the spectrum being auctioned, requiring a letter of credit for $881 million.

Douglas Evashkow, president of Niagara Networks, told CBCNews.ca at the time that he was unable to disclose who was funding his company because of confidentiality agreements.

Obviously with a name like "Niagra" (as in "Falls" – which have both US and Canadian varieties), AT&T would be the easy guess of wireless partner.

No strangers to Canada

San Antonio, Texas-based AT&T, the largest multinational telecommunications service provider in the world, is no stranger to the Canadian cellphone market. AT&T owned 34 per cent of Rogers Wireless before selling it back to the company in 2004 for $1.35 billion US in order to "monetize its stake" and concentrate on its U.S. operations.

In recent years AT&T has reversed course and expanded its international operations. In one of its latest big moves, AT&T in October applied to enter India’s upcoming spectrum auction in partnership with a local company, Mahindra Telecommunications Pvt. Ltd.

AT&T also announced earlier this month that it will invest $1 billion US in 2008 in its international businesses, 33 per cent more than it spent last year and double its expenditure in 2006.

In a recent interview with CBCNews.ca, AT&T Canada executives declined to say how much of the investment would go to Canada but said the country was a key priority. The company provides telecommunications services — minus cellphones — to multinational corporations operating here.

Maura Lendon, chief counsel for AT&T Canada, praised recent moves by the government to boost telecommunications competition, including the favouring of new entrants in the spectrum auction.

The government in November ruled that 40 per cent of the airwaves up for auction would be reserved for new entrants, meaning that existing players Rogers, Bell Canada Inc. and Telus Corp. are restricted to bid on the other 60 per cent.

"We do see more positive trends in the Canada market, which I think are opening opportunities. It trends towards more open competition," Lendon said.

How long will it take before the partner sets up shop and can start slanging iPhones?  We have no clue…all we know is Canadians want iPhones and are pretty upset that they don’t have an Apple-blessed way of getting them.