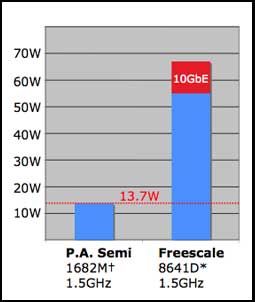 In April 2005, Apple was at a crossroads.  IBM wasn’t delivering on its 3GHz chip promises and wasn’t making efficient, low power, high speed versions of its processors.  It just wasn’t a priority.  Apple had to do something.  At the time, that something turned out to be moving to Intel x86 processor lineup which blew away anything IBM had to offer (Apple was still using Motorola/Freescale G4s in its laptops) in terms of power/watt.

The Register broke the story a year later that there was a third player involved in that switchover.

P.A. Semi had a chip that would have kept Apple on the PowerPC processor roadmap for the next few years.  It had a low power 2GHz 64-bit dual-core PowerPC processor that matched up very well against Intel’s Core Duo line.  The problem was that this chip wasn’t going to be able to be produced in large quantities until 2007.  Far too long at that point to wait on an unproven technology.

Conversely, Mac users wouldn’t have had the option of using Parallels and VMWare Fusion as well as benefitting from lower-cost Intel parts and components.

Obviously Apple never lost touch with P.A. Semi and never really stopped working with them on some level.  Apple now sees their technology as so incredibly important to their core business that they’ve bought them with cash.

It is amazing how things in the technology industry come full circle…in such a short amount of time.