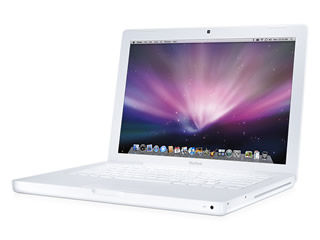 Apple’s move to field more environmentally-friendly LED displays seems set to yield a much larger field of so-equipped Macs, with news this morning that AU Optronics has announced a full range of 16:9 LCD panels for displays.

We know that AU Optronics is one of two display manufacturers contracted to produce screens for the new MacBook models, which are expected to ship in the third quarter of 2008.

The new displays even include a 21.5-inch 1080p full HD resolution panel – large enough for Apple to potentially introduce the technology into iMacs and a small Apple display,

The new products are set for demonstration at Display Taiwan 2008 next week, and the display range includes screens which could soon appear in MacBooks and MacBook pros – even the 17-inch MacBook Pro.

Both 15.6-inch and 14-inch TFT LCDs are equipped with an LED backlight, HD resolutions, 500:1 contrast and 60% colour saturation. The panels’ PCB structure has also been "designed to reduce noise when wireless networking, the company highlighted".

16:9 widescreen LCD panels are the trend for information technology display applications, and it is one of our focuses at Display Taiwan 2008 exhibition," said Michael Tsai, General Manager of IT Display Business Group of AUO. "The migration from 16:10 to 16:9 in widescreen market has gone fast. After AUO launched the 24-inch 16:9 Full HD LCD panel for desktop in the first quarter this year which became a big hit in the market, we released another 3 models for desktop in the second quarter; we will complete our 16:9 lineups for desktop with 27-inch model by the end of this year. In the near future, we plan to utilize LED-backlit green LCD panels for 16:9 desktop products. For notebook PC application, AUO aims to be the forerunner of 16:9 widescreen LCD panels with LED backlight. We will release another 4 LED-backlit panels: 10.1-inch, 11.6-inch, 13.3-inch, and

17.3-inch by the first half of 2009. AUO will take the lead in 16:9 aspect in IT display area, so as to provide consumers better enjoyment in digital media and Full HD contents such as Blue Ray DVD playback or high definition TV broadcasting."

With the technology now available, we think it’s time to commence speculation on a new MacBook with a 14-inch 16:9 display capable of playing Blu-ray as it should be played, and a MacBook Pro with a similar, larger display.

This is pure speculation, of course…