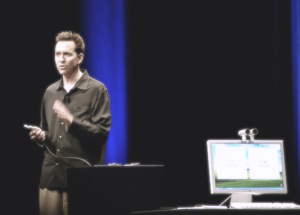 Apple CEO Steve Jobs is keeping a close eye on iPhone development as the importance of its strategy for mobile computing continues to unfurl. Jobs is taking Apple’s future so seriously he’s effectively handed over more control to fellow exec, Tim Cook, who now oversees the work of the Mac engineering teams.

Forstall reports directly to Jobs, and is responsible for the development of iPhone software, "including the user interface, applications, frameworks and the operating system," according to Apple, at least.

Mac engineering leader Bon Mansfield will be reporting instead to Tim Cook, (who himself answers to Jobs). Mansfield’s the man who led the teams building the MacBook Air and the all-in-one iMac.

While all these men now sit on the executive board (so communications between all parties should be better than ever before) we do think the move represents just how important Jobs & Co. consider the company’s iPhone developments.

Mansfield and Forstall were each awarded a grant for 25,000 restricted Apple shares as part of their promotion, worth over $4.17 million as of May 30, but not scheduled to vest until March 2010.