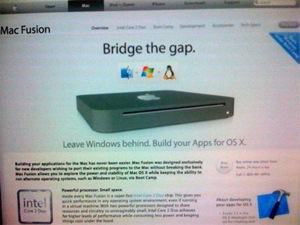 Developers, developers, developers – and they’re all in San Francisco today for the opening of the WWDC, with that in mind news of the Mac Fusion gizmo is setting tongues wagging – though whether it’s true, false of a happily optimistic Photoshop pipedream isn’t completely clear (Our BS detecter needle broke off when we saw this).

See here, Mac Fusion looks so much like an Apple TV it may actually be one, and the use of a Windows logo within Apple’s site seems a little, erm, unusual.

So what am I going on about? Mac Fusion – allegedly a product for budget-strapped developers searching for the hardware they need to port applications to the Mac. Though that’ what we thought the Mac mini (if it lasts) could be used for. If claims are true (and this close to WWDC it kind of doesn’t matter any more), Mac Fusion will be equipped with a 2.1GHz Intel Core 2 Duo mobile processor, will offer an 800MHz FSB and 3MB L2 cache. And yeah, the U.S.P. is its Boot Camp support, meaning users will be able to run Windows and Linux on the device, while maintaining the stability they expect from Mac OS X.