iTunes 3G Music Store – not yet… 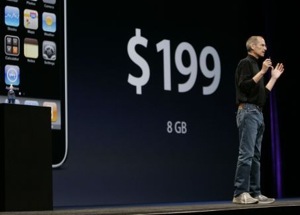 Despite being 3G, Apple’s new iPhone won’t allow users to download music from iTunes using 3G networks – at least, not yet.

According to Apple’s product page, the mobile version of the iTunes Music Store will remain solely accessible using WiFi. Is this a missed opportunity? We think it might be – but, equally, Apple has a practise of dribbling new features out during the life of a product, in order to stimulate and to maintain sales.

Look to Napster Mobile, Rhapsody and the numerous (but not particularly widely-used) mobile music services. These already allow users to purchase and download tracks using 3G connections. With the movement to mobile music and music anywhere continuing (as noted in this Guardian report yesterday), the only reason Apple may not yet have introduced a 3G music store has to be the reluctance of the carriers to allow the company to undercut their own music services, simply by offering a better service.

We think that reluctance will fade as iPhone market share improves, we also think we may see more movement to support mobile music within the next major version of ITunes, which we’d anticipate for September/October this year, around the traditional iPod refresh season.

We’re very surprised at the lack of A2DP support in the Bluetooth stack used in the iPhone – that’s an incredible shame, we’d like to be able to use the device to stream music to speakers and our choice of Bluetooth headphones (though, let’s face it, those Bluetooth headphones with their little flashing lights are always a fashion crime).