Apple/VW iCar – the rumours drive on 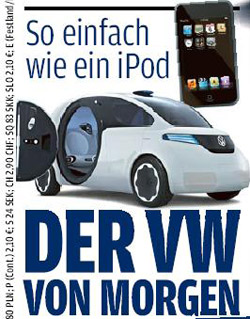 We don’t believe it so it may be true, but the latest edition of a German car magazine shows a mysterious new high-tech car on the cover, accompanied by the slogan “So einfach wie ein iPod,” (As simple as an iPod) – and commentators are queueing up to say it might be, but probably isn’t, the so-called ‘iCar’.

What’s an iCar? See, as long ago as last year there were rumours of meetings between Volkswagen CEO Martin Winterkorn and Apple’s Steve Jobs. The two men were alleged to be discussing proposals to jointly develop a compact car that integrated Apple solutions.

These talks reportedly fell apart last December, but the iCar legend lives on. Perhaps Apple simply allowed Jonathan Ive and his design team to offer Volkswagen some advice on the creation of simplified user interfaces? Or perhaps the two firms just wanted a little chat about in-car iPod and iPhone integration?

This iCar, if built, would take on the likes of the Mercedes-Swatch collaborated Smartcar for great gas milage/city maneuverability.  Smart cars have proven extremely popular in European cities and are currently entering US markets.   If Mercedes and watch/design company Swatch could collaborate on a car, why can’t Apple and Volkswagon?

The car described on the cover of the German petrol-head’s magazine is extremely futuristic, with round doors and shaped like an unusual white bubble. Is it likely to be the first fruit of any vaunted collaboration?

Not according to iSuppli analyst Richard Robinson, who last year said the huge differences in corporate culture between Apple and the car manufacturer would make any joint project difficult, predicting that even if cooperation was taking place, the first vehicles wouldn’t appear until “at least 2010”.

"Apple is a highly innovative and dynamic consumer electronics company that generates significant profits from living off its wits and supplying niche markets with the next big thing in music players, mobile phones and personal computers. VW, on the other hand, is from an entirely different tradition: the more conservative world of automotive, with its solid four-to five-year development cycles, tight margins and production-standard compliance requirements that would bring even the most enthusiastic designer from Cupertino to his knees," the analyst said.