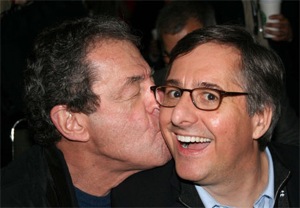 Needham & Co. analyst Charles Wolf this morning raised his firm’s target price on Apple stock to $240 (from $235), predicting Apple will sell near 30 million iPhones next year.

Wolf based his new predictions on Apple’s seeming decision to drop revenue-sharing deals in most of the countries it offers the device in, and on strength of the carrier subsidies being offered with iPhone 3G, which see the mobile sold for as little as one Euro by T-Mobile in Germany and Austria.

On strength of the much-improved iPhone offering (principally based on price), the analyst expects the iPhone 3G will snare 7 per cent of the US mobile phone market next year, with sales of 14 million units there; beyond the US, Wolf estimates international iPhone sales will hit 15.6 million sales next year, for a total figure just shy of 30 million total sales in 2009.

What’s more significant is that the addition of 14 million new iPhone customers in the US, "would represent 20 per cent of AT&T’s current subscriber base," Wolf reports. "While this percentage may appear high, it misses an important aspect of the iPhone phenomenon.  A recent survey by Rubicon Consulting found that about 40 per cent of iPhone buyers in the US switched from other carrier networks. So the iPhone’s addressable market is larger than AT&T’s subscriber base." Which is good news for AT&T shareholders, we suppose.

Wolf warns that climbing iPhone sales will have the consequence of cannibalising the iPod market by around 30 per cent, that means Apple’s likely to shift 95 million of its media players in 2017, for  a future installed base of 235 million.

The analyst also notes the real deal behind all this activity, predicting the combination of the existing iPod halo with the growing iPhone halo will drive Mac sales far, far higher. "The addition of the iPhone halo effect increases the number of Macs sold in 2017 from 40 million units in the previous forecast to 44 million units in the updated one," he wrote in his report.

And there’s more. Wolf also seems convinced that Apple will be able to create and disrupt the smartphone category with the introduction of the App Store.

"In the PC era, the adage was ‘software drives hardware’. Software applications, which made the PC truly useful, became a major driver of hardware sales. Will the same thing happen in the smartphone industry?" Wolf states, adding, " Our bet is that it will."

"The emergence of the first viable software platform in the (smartphone) industry could drive iPhone sales above the levels we modeled in this report," he observes, adding, "And the iPhone apps promise to be far cheaper than those that run on PCs…"

Finally, the analyst warns: "It’s not possible to say whether our forecast of worldwide iPhone sales of 63 million  units in 2017 is outrageously aggressive or outrageously conservative."

Given current indications suggesting massive global pent-up demand for the iPhone 3G, we’re speculating Apple will achieve the level of sales Wolf anticipates, and we think this will continue to drive Mac market share to climb.