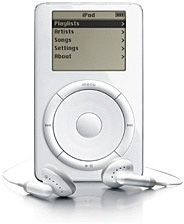 Wondering how Apple has bought down the price of the iPhone? Anyone remember the first-generation iPod, which shipped with its own power adaptor?

Announced on October 23, 2001. Jobs announced the first-generation iPod put "1,000 songs in your pocket," Apple charged $399 for the device. Over time, Apple whittled away the cost by sourcing lower-cost components and by removing things like the dock and power adaptor from the retail product, making these available as optional extras.

Now the company is doing the same thing again as it makes its iPhone more widely accessible at $199, subsidised by carriers. In order to reduce costs while still delivering a cutting edge device, the company has moved to a plastic back (a widely reported feature) and once again taken something out of the box: unlike the first-gen device, the iPhone 3G ships without a dock. You’ll have to buy that separately at a cost of $49, though you don’t require the dock in order to sync your phone.