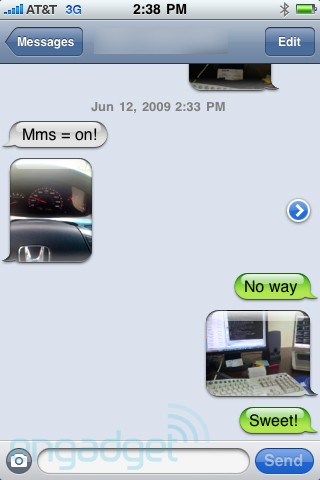 Apple’s kept it quiet, but the company has been quietly developing a way iPhone users can send MMS messages to friends using the device. At least, that’s the latest rumour spreading on teh ‘Net.

Seems an internal AT&T email has emerged regarding a service which lets users attach images, audio and video to a normal SMS.

"As Canada’s leading wireless carrier, Rogers is thrilled to not only bring the iPhone 3G to Canada but to make it affordable and accessible to as many customers as possible," says John Boynton, SVP and Chief Marketing Officer, Rogers Wireless. "We’ve designed a pricing structure that offers affordable, flexible voice and data packages so Canadians can truly unleash their iPhone 3G experience on Canada’s fastest wireless network."

Finally, Apple and China Mobile have cleared the main hurdle to a deal for China, meaning iPhone could ship in that country before the end of the year. It’s understood Apple’s move to abandon insistence on a revenue-sharing deal was the barrier to doing the deal in the first place.