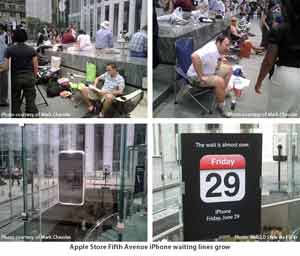 You’re all  familiar with last Friday’s iPhone tragedy, so I won’t dip into that again, but what I really want to know, and I’m sure everyone else wants to know is, what Steve was thinking! How could he not see that coming? I mean, you roll out the iPhone in twenty-one countries on the same day, and expect everything to be fine? Most would wonder, “what would the implications of millions of people creating the same transaction around the world at the same time be?” Apparently, Steve does not fall into the “most” category. Don’t get me wrong. I love Steve. I love him so much I feel like I can refer to him by his first name, without sounding like a dork. The thing I don’t like is his casualness and laid-back personality.

Since my mom is making me wait for a 32GB iPhone,(I’m 14) I was not stuck in those jaw-dropping lines. (By the way, when is the 32GB coming out? Most seem to say before Christmas. I’ll have to stay on top of that). If I was to wait in those lines and experience what thousands went through that day, I would have shot myself. (But only in my foot so I could still get my phone!!) To top it off, you have thousands of other people trying to download the iPhone 2.0 software. Nice job Steve. Nice job. I could understand if they were using the different carrier’s servers, but iTunes??? Owning an iPhone, (or any Apple product for that matter) is all about the first experience. I must say, not being able to activate your phone until the end of the day and having to use it as a paperweight is not such a pleasurable experience, or thought.

What we need to learn from this: Be first in line, so you don’t run into any problems! We also know now to expect the worst. Nothing can go perfectly as planned. We just need to understand that it’s Apple, and it will be fixed. Just not as soon as you think…