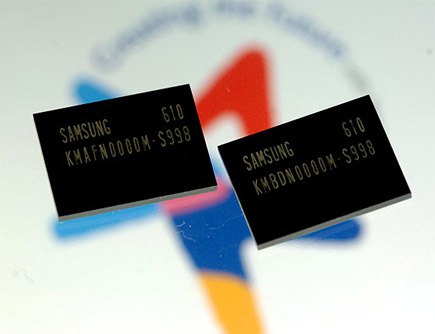 Apple has placed huge orders for flash memory, forcing Samsung to inform less important customers it plans to reduce the quantity of flash it will ship to them from July.

We already know Apple and its manufacturing partners are already building new model iPhones, and its conceivable the flash memory order is for future manufacturing of the product.

"Samsung recently informed them it has secured orders for 50 million 8GB-equivalent flash chips mainly for use in Apple’s iPhone," DigitTimes reports. "Amid the new orders, Samsung said it would sharply cut supply to other customers in July."

However, the new iPhone is set to sell at a low and subsidised price, which we think may pressurise iPod sales. We suspect Apple will now be looking to upgrade the iPod range to compete with its own product, with a focus (we expect) on the iPod touch.

DigiTimes informs: "Apple already landed a batch of 25 million 8Gb-equivalent NAND flash chips from Samsung in June and commented that ongoing procurement will depend largely on iPhone sales." With Apple only expected to sell between 11-15 million iPhone 3Gs this year, it’s clear Apple’s pulling in some flash to revitalise its iPod range.

Diary watchers will point out that Apple customarily updates its iPod in September/October, which is true – but faced with pressure from its own product, will Apple accelerate its iPod upgrade road map?