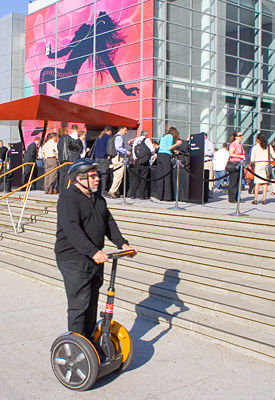 Yes, you heard right, the Cheif Technology officer at Segway, Doug Field,  has left the company to become a VP of product design at Apple.

What does this mean?  Actually it means nothing but it isn’t hard for the mind to wonder on this one.  Remember Steve Jobs was one of the people who said the Segway (known as the Ginger project back then)  was as big a deal as the PC.  (As a side note, here is an interesting little jaunt through the first Jobs meeting with the Segway team)

So who is Doug Field and why is Apple interested in him?

Doug Field is a guy who has dealt with electronics that go into motors and wheels and balancing his whole career.  When you look at Apple’s product roadmap, there is nothing currently there that fits into his expertise.

As the Vice President of Design and Engineering and Chief Technology Officer for Segway LLC, Doug leads some of the most talented engineers and designers in the world in the conception, development, and delivery of radically new forms of transportation. Doug’s team is wholly responsible for the development of the Segway Human Transporter (HT) as well as all the research and development of future Segway products.

Doug’s career of managing and developing new products and manufacturing processes for the automotive and medical industries led him to DEKA Research & Development in 1996. He worked at DEKA for several years leading the prototype design and overall technical leadership for the INDEPENDENCE™ IBOT™ Mobility System. Prior to that he was the Manager of Process Development for Johnson & Johnson Medical, Inc. where he led the introduction of advanced manufacturing processes for high-volume medical device production. Earlier in his career, Doug was a vehicle development engineer and team leader at Ford Motor Company, focusing on the development of ride, handling, and noise and vibration characteristics on several car platforms.

Doug was a fellow in the dual degree Leaders for Manufacturing Program, a partnership between the MIT School of Engineering, the MIT Sloan School of Management, and major U.S. manufacturing firms, where he earned a masters degree in mechanical engineering and an MBA. He attended Purdue University for his undergraduate education, where he received a BS in mechanical engineering with highest distinction.

Some of the forum members even go on to postulate that Apple could end up buying Segway.  While more than slightly premature, the possiblity certainly is interesting..