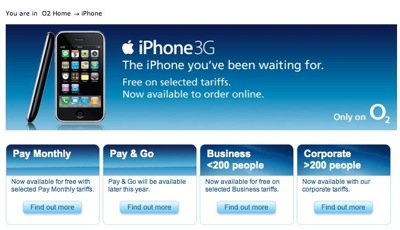 Yet more news as O2’s UK iPhone 3G launch unravels – the 16GB iPhone isn’t available yet, there’s no white model, and we won’t see a pay-as-you-go option until Christmas.

The UK carrier alerted iPhone customers this morning with a text message promising them the chance to upgrade their iPhone to the new iPhone 3G now, in exchange for which they will receive the new model on 11 July, when it ships.

"To thank you for being an iPhone fan, we’re offering you an early upgrade to iPhone 3G. You don’t have to wait until the end of your existing contract, all you’ll need to do is agree to a new 18-month minimum term contract," the company said. With this deal only available until 11 October, its no surprise consumers flocked to get hold of the must-have next-gen ‘Phone.

Customers attempting to fill-in the online form were instead seeing a message which said, "There has been a problem with taking your order. We apologise for the inconvenience. Please try again."

While the 8GB model is available at no additional cost to customers on the £45 and £75 per month tariffs (subject to a new 18-month contract), the iPhone 3G costs customers on the £30 and £35 tariffs £99 for upgrade to the 8GB model, and £159 to the 16GB model. However, O2’s online ordering page reveals that there is no stock of the 16GB model, and the only model available in the UK is black.

We reported last week that Apple is unhappy at the extent of iPhone unlocking taking place in the UK, fewer than 15 per cent of all the iPhones sold by O2 when it slashed prices on the 8GB model actually ended up in use on the carrier’s network. Apple since then has moved to limit UK supplies of the device – that’s assuming manufacturing problems haven’t limited the number of 16GB models the company could bring to market.

O2 today also warned that pay-as-you-go versions of the iPhone 3G won’t be made available until later in the year. While O2 declined to say when the product to ship, an official statement from Carphone Warehouse suggests we’re looking to a Christmas launch for the product.

In the US, AT&T also today confirmed it will offer iPhone’s free of a monthly contract, though these will cost approximately $400 more than the standard price.

Finally, to make the matter even more infuriating, O2 now says it is out of stock of the iPhone, at least, online.