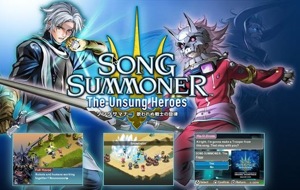 The creators of Final Fantasy, Square Enix, have introduced Song Summoner: The Unsung Heroes, a game for iPods that’s now available through iTunes.

The role playing game takes the songs on your iPod to turn into soldiers you control in a battle against mechanical creatures on a mission to destroy all life on the planet.

As the protagonist, Ziggy, players must embark on an epic journey to rescue their brother from the mechanical enemy.

"From the days of old, Melodica was a land of music, a land of freedom. The people sang, played and danced to the music they so cherished. Until one day, they came – the Mechanoids, who enhanced their bodies with machinery. Those who were tempted by greed and power willingly gave away their souls for bodies of steel, forsaking their humanity to become cold, emotionless automatons. Now, they seek to destroy all that do not embrace their way of life," Square Enix explains.

The game’s compatible with the iPod nano with video, iPod classic and fifth generation iPod.  Check the Video below.