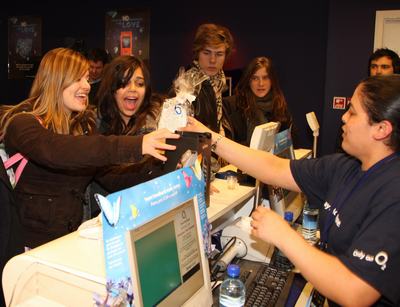 The all-new iPhone 3G is compelling enough to tempt many pay-as-you-go mobile phone users to take out a contract, new research shows.

GfK NOP carried out its research last weekend among UK consumers, and found that 16 per cent of pre-pay users would consider taking the new handset on a contract.

Furthermore, of that 16 per cent, two-thirds prefer one of the 18-month contracts over the pre-pay offer, indicating that the device has the potential to move customers toward long-term contracts.

On a week in which O2 reveals iPhone 3G orders at times reached 13,000 per second (!!!!!), Apple seems set for insanely great sales of the device, set to ship 11 July. The researchers found one in five mobile owners are interested in purchasing the new handset – effectively translating into 20 per cent of mobile phone users, a fairly significant slice of the market. A further 7 per cent are interested, but not on the current tariffs.

Awareness is insanely great, too:  97 per cent of 16-24’s and 72 per cent of those aged 60 and over are aware of the iPhone. Awareness is centred on the new handset features, with over half being aware of the improved 3G data speed (56 per cent) and the improved memory of 8 or 16 GB (54 per cent), but there is also good awareness of the different range of tariffs and handset prices on offer.

Anders Nielsen, Director at GfK Technology said, “The message from the research is very clear; the blend of handset subsidies, sensible tariffs and the improved technical specifications will combine to really drive demand. O2 and Apple have addressed most of the barriers which held back mass-market take-up of the original iPhone, so we expect the iPhone 3G to sell well. In addition to selling new connections, the research shows that the new iPhone offers will also help convert some pre-pay users to 18 month contracts which, in turn, could contribute positively towards O2 customer retention and ARPU levels.”

With O2 experiencing such strong demand, there are some concerns the company may be unable to deliver iPhone’s pre-ordered by UK customers this week on time. Electric Pig reports customers may not receive the device until next week, though O2 denies this, saying, “Customers that were successful in the pre-order will receive their iPhone 3G on Friday. The only exception is customers who live in certain postcodes, north from Aberdeen who will receive on Monday.”