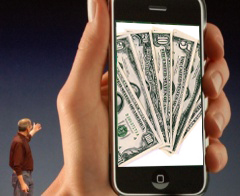 Yep, it is a hit, in case you couldn’t tell by the store lines, Apple is announcing today that they have sold 1 million iPhones this weekend.  According to Apple:

“iPhone 3G had a stunning opening weekend,” said Steve Jobs, Apple’s CEO. “It took 74 days to sell the first one million original iPhones, so the new iPhone 3G is clearly off to a great start around the world.”

The new iPhone 3G combines all the revolutionary features of iPhone plus 3G networking that is twice as fast*, built-in GPS for expanded location-based mobile services, and iPhone 2.0 software which includes support for Microsoft Exchange ActiveSync and runs over 800 third party applications available through the new App Store. In the US, the new iPhone 3G is priced at just $199 for the 8GB model, and $299 for the 16GB model**.

Oh…and the App store downloads topped ten million.  This isn’t actually as significant because a lot of those apps are free and previous iPhone and iPod touch users are downloading these.  Still, it is getting a lot of use!