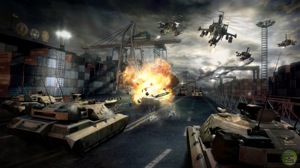 Sit back and look forward to new generations of voice-controlled games on the Mac, beginning with their debut on the iPhone. What’s making this happen is that a company that specialises in embedded speech interfaces for mobile devices has decided to make a move on the iPhone – and with iPhone running a version of OS X, it’s logical to expect Mac-bound movement in future.

"We expect to leverage our prior successes with video game developers that incorporate Fonix VoiceIn Game tool-kit for an increasingly growing mobile video game market," says Steven G. Jones, Fonix Director of sales and business development. "A hands free game like Tom Clancy’s ‘EndWar,’ developed by Ubisoft, features Fonix VoiceIn for Games and is a natural fit for the iPhone 3G."

Jones then began to wax quite lyrical on the iPhone’s potential as a gaming platform, saying the device would, "explode the market with the powerful, easy-to-use and intuitive Fonix voice interactive software."

In addition to Ubisoft, Vivendi, EA Sports, Harmonix and other game developers that have licensed Fonix speech technology, the company expects "an increasing number of new game developers to release games for the Apple iPhone 3G."