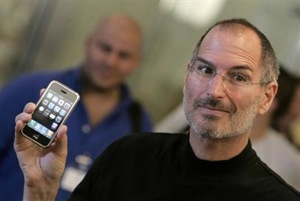 Demand for the iPhone remains "unabated" since the product launch last week, pitting Apple and Research In Motion (RIM) in a two-horse race for dominance of the smartphone industry, and at least one analyst believes it’s not RIM which holds the winning hand.

Apple this week confirmed one million iPhone 3Gs were sold in just three days. While we all experienced problems both at retail and when trying to activate the devices as the iTunes servers just couldn’t cope with the demand, Seeking Alpha today called the launch the "biggest consumer electronics launch ever".

Consumer it may be, but Apple’s made a pitch to the enterprise, also – and RIM is bound to be impacted, Wolf warns: "While RIM’s dominance of the enterprise market appears secure, at least for now, the company’s great growth driver-the consumer market-is bound to come under siege because of the iPhone. We’re cutting RIM from a hold to an underperform rating and reducing estimates."

RIM earned $482.5 million in its  first quarter which ended 31 May, double the revenue of the year before, but under expectations. The company hopes to take on Apple with the BlackBerry Thunder, a touchscreen device, and says it expects to achieve better results on strength of sales in the consumer market. But will the plan work? Wolf is clearly unconvinced.

"Much of Blackberry’s success stemmed from a paucity of competitive offerings from other smartphone manufactures. That ended on July 11 with the introduction of the iPhone 3G. Apple announced that it sold over one million phones in just three days. And our checks indicate

that demand has continued almost unabated since then."

The analyst warns that while its no fight to the death between the two firms, the iPhone will cut into BlackBerry’s incredible growth in the consumer smartphone market.

And RIM has no guarantees: "RIM’s counting on new iPhone look-a-likes to stem the tide," the analyst notes. "While these models should enjoy some success, they have no hope of matching the secret sauce of the iPhone – the tight integration of hardware and software that creates a unique user experience. Nor do they have any chance of evolving into an application development platform like the iPhone. wireless solutions for the mobile communication market worldwide."

It’s the iPhone’s software development that lends it its extra sauce, the analyst explains in his in-depth briefing to clients.

"The interest of the software development community has been overwhelming. Unlike the PC market, there has never been a viable application software market for smartphones because of the dramatic difference in the form factors of PCs and smartphones," he notes.

"Over 800 titles have been released for the iPhone through the iTunes App Store. We expect this number could top 10,000 within a year," he said, pointing out that the device’s ability as a games console means it will become a "must-have product for teenagers already addicted to their iPods.

"The lock-in effect the iPhone software creates should insure a staggering installed base for the device," he adds.

Wolf doesn’t believe RIM can match this. "It’s the superb integration of hardware and Apple’s OS X operating system that makes the device one of a kind. BlackBerry’s Java development tools are primitive in comparison. In our opinion, RIM has no hope of catching up on the software front, which promises to be the next battleground in the smartphone market," he writes.