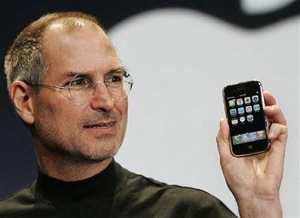 Word coming out of the inner circle says there’s no illness around Apple CEO Steve Jobs, and that reports of his ill health have been exagerrated.

There’s been numerous rumblings of concern at the Apple co-founders health in recent weeks. Questioned this week about the ill health rumours Apple’s chief operating officer, Tim Cook, said: "Steve loves Apple. He serves at the pleasure of Apple’s board. He has no plans to leave Apple. Steve’s health is a private matter."

Privately, it seems that there’s no cancer affecting the visionary Apple leader. "In recent weeks, Jobs has reassured several people that he is doing well and that four years after a successful operation to treat a rare form of pancreatic cancer, he is cancer-free," said the International Herald Tribune this morning.

However, Jobs reportedly "did have a surgical procedure this year to address a problem that was contributing to a loss of weight." The sources for this news declined to reveal themselves because they are not authorised to discuss the health of the company CEO,

Jobs’s appeared thinner when he launched iPhone 3G last month, leading to speculation his cancer may have returned. An Apple spokesman at that time said Jobs had simply suffered a "common bug" inthe weeks before the event and had been taking antibiotics.

Jobs has reportedly told people he is dealing with nutritional problems in the wake of his cancer surgery, which can lead to weight loss and low energy, even when the cancer has gone.

That the CEO’s health is under question is understood to have shaved some dollars of the company stock price. ”While the topic is delicate, we believe the absence of a straightforward denial of health issues will increase speculation of a worst case scenario,” Deutsche Bank analyst Chris Whitmore said, according to the Santa Barbara News.

While many say the company should answer critics with a statement on the health of the CEO, corporate government specialists say Apple is under no pressure so to do so. ”It’s only material if it affects his ability to carry out his responsibilities. Up to that point, it’s up to him," said Charles Elson, director of the Center for Corporate Governance at the University of Delaware.