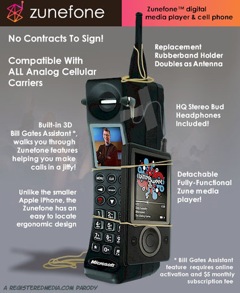 Today’s burning question: are Microsoft and Nokia hatching a plan to derail the iPhone’s momentum? And, if a claimed cooperative relationship between the two firms turns out to be true, are reports claiming an imminent iPhone nano reflective of an Apple strategy to deal with this new threat?

We have to grant we’re wandering the hinterlands of rumour and conjecture here, but this morning we learn Microsoft may be working with Nokia to cook up some kind of Zune phone…

As reported, the new plan from market-leading Microsoft involves Nokia building the hardware and Microsoft pimping the device(s) up with Zune-branded entertainment. Electric Pig reports the partners plan an "all-out assault" on Apple and its iPhone.

We’d like to observe that Nokia is set to launch its Comes With Music service later this year, which suggests it may not really need a Zune connection for song sales….

We’ll see how this all plays out, but if there should be any truth at all in these rumours, then is Apple planning to accelerate plans for an iPhone nano in order to consolidate and widen its share of the market before Microsoft’s increasingly desperate-looking counter-attack begins?

Before the flaming begins, this is conjecture and speculation that’s inspired by unconfirmed rumour…