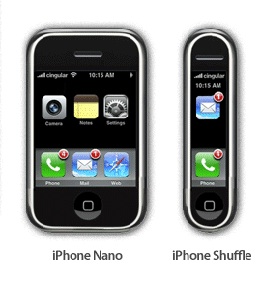 The Daily Mail’s report claiming Apple plans to launch an iPhone nano before the end of the year may have some truth – but the timing is awry, Lehman Brothers analyst Ben Reitzes warned last night.

The UK newspaper had claimed Apple plans to introduce a small version of the iPhone, quickly dubbed the ‘iPhone nano’. This gadget was reportedly to ship in time for Christmas and to be made available on a pay-as-you-go basis.

The analyst counters, “While we believe Apple is working on a lower-end iPhone form factor, we do not think one will come until Spring 2009."

This suggests Apple is working to deliver such a device, but isn’t planning one just yet, after all, the company has enough to do shipping the existing iPhone 3G to 50 more countries before the end of the year, the analyst writes.

Not only that, but it appears Apple hasn’t yet decided what "form factor" the device will take.

However, rumours of a smaller, less well-featured iPhone have persisted for a year at this point, leading many to believe it’s not a question of if, but when. Like Nokia, Apple will at some point have to diversify its range in order to widen its addressable market.

Equally, the Daily Mail’s sources may have confused the iPhone nano whispers with Apple’s secretive plan to upgrade its iPod range – specifically, the Mail report could be construed as suggesting plans to introduce multi-touch to the nano, though the utility of such a proposition remains to be seen.