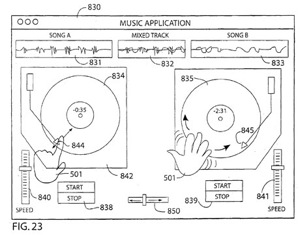 Apple appears to be patenting all manner of implementations of its multi-touch technologies, with a recent patent revealing plans to create virtual DJ software for potential deployment on MacBooks, rumoured Multi-Touch tablet Macs and – potentially – the iPhone and iPod touch.

The Apple patent – which is available in its entirety here – describes ways to manipulate objects on a touch screen, including numerous user interface applications, detailed with accompanying diagrams.

For DJ’s the patent describes the following implementation, which basically explains a virtual pair of twin turntables which appear on the screen, touch-sensitive, these would let DJs mix and shift various kinds of digital media.

"Like a pair of physical turntables, stylus 844 and stylus 855 can be graphical icon indications of a playback queue, the position of which can be varied by touching the queue on a touch sensitive display screen and dragging the icon to the desired position on the graphical record."

"[0148]During song reproduction, the records 834 and 835 can be manipulated similar to a physical record. For instance, rapid back and forth movement of a record can cause the sound effect of a record "scratching," as disc jockeys often do on physical turn tables," the patent explains,

Like all Apple patents, the existence of this one doesn’t mean the product will ever actually appear – in a sense, patenting these technologies may actually hamper their appearnace, as third party developers will require Apple’s permission to use such patented technologies.