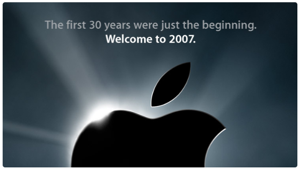 Analysts at Piper Jaffray have set tongues wagging, predicting new Macs and iPods will make their first appearance at an Apple special event in September.

True, the analysts aren’t claiming to have any definitive proof of the so-called Apple happening, but, as Piper Jaffray analyst Gene Munster points out – the company has held a special event that month every year for the last three years. So  it’s educated guesswork.

The analyst also expects increased capacities for the iPods shuffle and nano, but the same prices. He doesn’t anticipate new form factors for these products, but does suggest the iPod touch could see a redesign and be introduced at a lower $199 price.

Additional highlights from this analyst’s Apple predictions include:

– Touchscreen Mac is unlikely right now. A "MacBook Touch" may emerge in 2010.

– Wider deployment of multi-touch, and Apple will eventually swap the trackpad on its laptops to backlit colour screens.