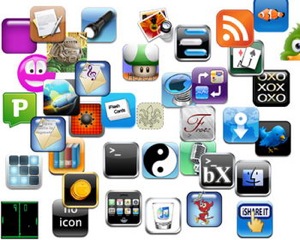 Apple boss Steve Jobs told the Wall Street Journal that iTunes is making a million bucks on selling iPhone application downloads each day – but just how ‘sticky’ are those apps?

Sure, we’ve played with the ‘Wooo’ button, messed around with iPint and made a few friends with Crazy Mouth, but what’s really happening in the active, profitable iPhone app ecosystem?

Quite a lot, it seems, according to GigaOm, which asked Pinch Media chief, Greg Yardley, for a little information…(in case you haven’t heard of it, Pinch Media provides a range of analytical data for iPhone developers). And there’s some interesting information to help comprehend the state of the iPhone and third-party application union:

– There’s ten downloads of free apps to each purchase of a paid app.

– Most use apps only once per day

– Average number of uses per day is around 1.2

More on this right here.

Meanwhile, Apple seems to have gone crazy for banning applications – seems all you need is some small vocal minority to begin making its usual babble, or perhaps some vested interest firm to start banging on on legal, and the Apple team will remove your app at the drop of a hat (which is a shame when some complain it takes so long to get their software uploaded in the first place).

Other notable recent casualties include:

– PhoneSaber – apparently removed because the people with the copyright on Star Wars demanded it.

– Slasher – apparently removed because it featured violence (far better tune into CNN for that).

– Netshare – seemingly removed because AT&T doesn’t want Mac users going online via their phone – even though MOST OTHER 3G PHONES ARE CAPABLE OF BEING USED AS A MODEM TO GET A MAC ONLINE!!

– I Am Rich – removed because thousands of people noted how expensive it is, and because a couple of incredibly stupid people didn’t understand the significance of the price tag and Buy button. Duh!

Any more out there? Comments…etc., etc.