Intel Core i7 Processor Mac Pros and Xserves on the way?

Intel Nehalem chips have been slated to go into Mac Pro type workstations since the codename was revealed in Intel’s roadmap two years ago.  Now those chips, and by extension, those workstations are a lot closer to fruition.

That’s because Intel has officially revealed the branding for the next wave of high end processors according to C|Net.  Next stop product launch…which is looking like late 2008 (unless you are MaximumPC)

Intel’s description of i7:

We expect to see these by Macworld 2009 in Xserves and Mac Pros..more from C|Net:

Currently known by the code name Nehalem, the desktop Core i7 processors are slated to ship in the fourth quarter and will be based on a new microarchitecture that will have faster chip-to-chip communication and be better at doing multiple tasks simultaneously–what Intel calls hyper-threading, among other improvements. 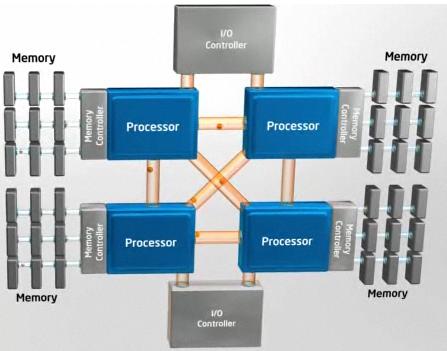 The Core i7 processors will also be Intel’s first processors to put all four cores on one piece of silicon. (Something that Advanced Micro Devices has already achieved with its Phenom and Opteron processors.)

Core i7 chips are expected to have a special appeal to enthusiast gamers because of the increased performance that typically comes with a new Intel microarchitecture. Content creation will also be a target market, Intel said.

Versions, due later, will be targeted at the server market and, after that, the mobile space, where certain versions will integrate a graphics engine onto the same piece of silicon as the processor.