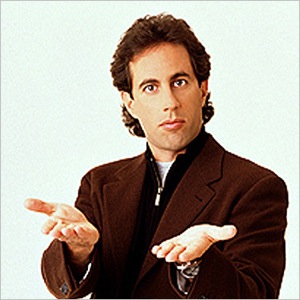 Microsoft has hired Jerry Seinfeld to be the face of its new counter-offensive-cum marketing campaign.

The oh-so-cool Microsoft will spend $300 million on a series of ads on the theme of ‘Windows Not Walls" (I’m yawning already, but there it is). The ads will feature the dramatic skills of popular in the US comedian, Seinfeld, and well known thespian, Bill Gates (acting? Who knew???).

Seinfeld will get $10 million for his part advertising the world’s largest software company while working beside one of the world’s richest men. And what’s the deal? Microsoft wants to get rid of its stodgy and dull public image, and wants to convince us all through advertising that Vista and the Zune aren’t the disasters we all know they are..

The campaign is the brainchild of Crispin Porter + Bogusky, a Miami-based ad shop that has helped revitalize brands such as Burger King, the Wall Street Journal tells us. We’re thrilled to look forward to the campaign.

Oh, and remember Jerry always had his trusty Mac Classic in the corner of his Manhattan apartment.  Its going to be hard to imagine him liking Vista.