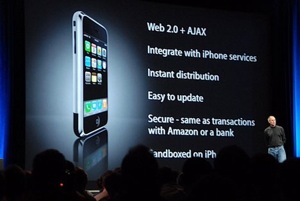 One of the world’s leading Microsoft .Net developers today called Apple’s iPhone the most powerful mobile platform ever seen.

Writing on his .Net Addict’s Blog, a leading global .Net expert, Kevin Hoffman, wrote: "There is one thing that I can confirm without breaking any NDA: the iPhone is hands down, without a doubt, the single most powerful mobile development platform EVER."

His statement follows publication of the details of a .Net and iPhone comparative seminar Hoffman delivered at WWDC. Hoffman has written a series of books on Microsoft’s .NET development frameworks.

Hoffman reflects that the future seems bright for the iPhone and third party developers working away to use it. "Whether the platform will see enterprise adoption or whether it will remain plagued by people making $2 flashlights… time will only tell," he said.

Apple CEO Steve Jobs recently told the Wall Street Journal, "This thing’s going to crest a half a billion, soon. Who knows, maybe it will be a $1 billion marketplace at some point in time."

The whole business seems set for further growth. Developers across the board from all corners of the planet are reporting excellent results from the first few weeks of applications sales, with more (and, presumably, better) applications set to ship in the coming weeks. Some developers have already been able to quit their day jobs to focus on the iPhone mission.

More positive feedback, too, from Japan, where the man who developed Japan’s first mobile phone internet service, iMode in 1999, Takeshi Natsuno, accused Japan’s telecommunications industry of stifling the kind of creativity that is so apparent in the iPhone, saying, "This is a great device. This kind of device cannot be produced by Japanese manufacturers. Never."

"Natsuno, 43, who quit top Japanese mobile carrier NTT DoCoMo three months ago, expressed disenchantment with this nation’s phone industry, which he said was dominated by stodgy conservatives, who lacked the charisma and creative sensibilities of a Steve Jobs."

However, despite huge attention surrounding the iPhone, developers are restricted in what they can discuss. "What’s really going on here is that there is a huge, burgeoning community of iPhone developers and they are positively begging for community," Hoffman explains.

"They want to be able to talk to each other, help each other, learn from each other, and have some place where they can go for support and to hone their skills. They see the restrictive terms of the NDA as an inhibition to developer adoption of the SDK and possibly even an inhibition to commercial-quality applications being produced by first-time developers because there is such a lack of community support.

"At some point this community is going to either self-form, and the NDA be damned, or Apple will facilitate it somehow. My hope is that Apple facilitates it."