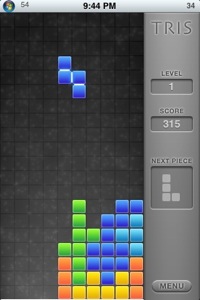 In a post last night the independent developer – a student – wrote: "Well – I’ve received notice from Apple that they’ve been contacted by The Tetris Company about Tris. That, I’m afraid, is essentially game over. Do they have a case? No. Not really. I am convinced that if it went to court, the "copyright" claim would get thrown out completely. The trademark, perhaps not – but if I changed the name, to eg. "Trys", that would be much harder for them to argue."

The developer argues that he lacks the time, energy or resources to fight the claim made by the Tetris Company, ending his message, "it’s with great sadness that I must announce that I’ll be pulling Tris from the App Store on Wednesday, August 27th, to remain in Apple’s systems but publicly unavailable until I work out a solution to this."

While the developer freely admits he understands the Tetris Company is acting in good faith in order to protect its brand, but accuses the larger firm of engaging in what the developer feels is "petty bullying".

"[They] are, presumably, relying on my being a small developer with insufficient resources to defend myself. And — hey ho — it appears to be working," he writes, before urging anyone who may want to have a play with his game to download the free title from the App Store before it is withdrawn from sale tomorrow

"To clarify: if Apple had not told me they’d “take action” of their own if I didn’t resolve the “dispute”, Tris would be staying up. I don’t think this will be permanent; when I have the time and can find a good copyright lawyer, I’ll be figuring out exactly what my position is and how I can make Tris available again," he adds.