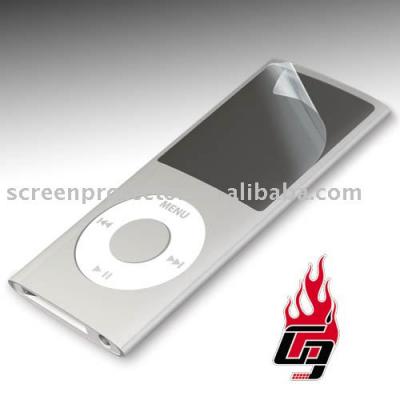 Either this is a perfect mockup, or the real thing. My money is on the real thing, and I sure hope I cash in. This is by far the sleekest looking nano yet, and I have said since the nano was created that the screen should be portrait when held upright, rather than landscape. I would really give it my approval if it had an accelerometer, allowing the device to go in to cover flow when held sideways, and if the click wheel changed what it displayed depending on the way you held it. This would help avoid confusion when holding the nano sideways.

As I have said before, I believe that this wont be the only nano we see. I have a feeling that there will be an iPod Touch Nano to accompany it on Tuesday. This would definitely be a welcome addition to the lineup, as its obviously that touch will eventually take over the entire lineup… its just a question of when. When this does happen, I will be the first in line to purchase an iPod Classic Touch (160 GB w/multi-touch?!? Yes please!)

While I’m excited to see this is the design of the new nano, I’m pretty shocked we are seeing this. Apple’s secrecy has dropped to an all-time low. I remember years ago when rumors were rarely true, and a photo like this could only be seen after the keynote. I always hoped a picture like this would get leaked, as it was unthinkable back then. Now, I wish the opposite. The excitement I had when I watched the Macworld 07 keynote was only made possible because of Apple’s secrecy. I knew that Apple would announce the iPhone, but I had no idea what it would look like. I expected a flip phone, or at best, a stylus driven, slide out keyboarded, “smart phone”. I was not prepared at all for what came, and that excitement placed me in a reality distortion field for over a year (until all of my 2.0 bugs). If I had seen a photo before the event, I would not have been nearly as excited, and that’s why I wish Apple would tighten what they let out, and if they do let it out, they should remove it promptly like they used to.

Until Apple tightens the lid, enjoy the picture! Do you like the new nano, or not?