Oh my, Vanity Fair says Stevo is 4th most influential person of the New Establishment. 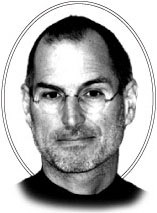 Whatever.  We don’t buy into these things that much.  Especially Vanity Fair.  However, it is  a nice push for the Apple founder to be thrown in mainstream publication – one not about computers.  I guess tech may finally matter?  The Google founders made #3 while Vladimir Putin and Rupert Murdoch made the #1 and 2.  Great company to be in.

Oh, in case you are worried, Bradjolina made number 9.  Whew!

SPHERE OF INFLUENCE: After changing the computer business with his Mac line and the music business with iPod, Jobs has completely upended the mobile business with iPhone. Rivals are scrambling to create products that stack up against Jobs’s mini-computers that also happen to make phone calls. And consumers who used to spend nothing for their cell phones are now willing to drop hundreds on Apple handsets.

CLOUD OF UNCERTAINTY: Jobs’s skin-and-bones appearance at the June unveiling of the new iPhone touched off several days of frenzied speculation about his health, prompting the tight-lipped Apple P.R. department to tell reporters that he was fine. Given that Jobs, 53, had previously lived with pancreatic cancer for nine months without disclosing it, it seems likely that his health will remain under scrutiny.

RARE EVIDENCE OF FALLIBILITY: Last year Apple began selling the eight-gigabyte iPhone for $599, then quickly cut the price by $200. When early buyers said they’d been ripped off, Jobs dismissed their complaint. A day later he offered them an apology and a $100 credit.

ON THE RECORD: When New York Times columnist Joe Nocera asked Apple about Jobs’s health, the Apple chief phoned him, snapping, “You think I’m an arrogant [expletive] who thinks he’s above the law, and I think you’re a slime bucket who gets most of his facts wrong.”