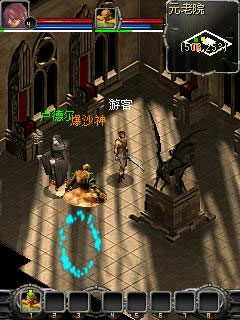 iPhone users – your platform is the new hot ticket for games developers – and the Chinese developers behind massive multiplayer roleplaying game (MMORPG) Anrufen Online have their eyes set on the Apple device.

The game is huge in China, and developer WiStone plans to make it available for Symbian devices next year – and word from Pocketgamer is the company is also developing a version for the iPhone.

"The game takes an isometric viewpoint and a fantasy theme, and promises rich community features around its core battles, as well as a detailed storyline, and the ability to raise your own familiars to do battle on your behalf," the report states.

The company was founded in 2006, with a development team of 30-40 people. Besides the mobile online game Anrufen Online, the company has also developed 12 mobile single-player games, including Bubbles in the Sea, The New Three Kingdoms, and Eternal Life Revival.

The video that follows shows an early beta build of the game working on a Symbian phone – we reckon they’ll shift more copies once they take it to the iPhone, though.