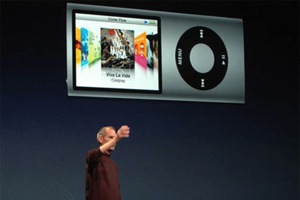 Once again, we thought our readers may take an interest in the latest post-event client bulletin from American Technology analyst, Shaw Wu.

While he maintains Apple is a stock to buy with a $220 value, Wu seems a little unsure on Apple’s announcements, saying, “while we are pleased to see lower pricing, we are concerned that price points may remain too high given the tough macroeconomic environment and relative to the 3G iPhone at $199 and $299.”

Without further ado, here’s Wu’s message to clients, in full:

While we find the new fourth generation iPod nanos impressive with 9 bold colors and an accelerometer, the refresh is arguably moderate, similar to its earlier 1G and 2G designs. We find the $50 price cut to $149 and $199 for 8 GB and 16 GB models positive and believe it should help make this an attractive holiday item.

Price Cut On iPod Touch Nice, But May Not Be Enough.

Other minor updates Steve didn’t mention in his keynote include consolidation of its iPod classic to one price point ($249) with two colors, and new colors (but no price cut) for its iPod shuffle.

No Material Change In Build Plans.

From our supply chain checks, we have not picked up a material change in iPod build plans. At this point, we remain comfortable with our forecast of 11 million iPods for the September quarter and 24 million for the December quarter.

While AAPL shares will likely remain volatile given market sentiment, we view current levels as a buying opportunity for longer-term investors. AAPL remains one of the best positioned large-cap technology companies. We see upside to $220 based on 32.5x our CY09 EPS of $6.73.

We believe continued favorable component pricing trends, particularly in NAND flash and memory, as well as less upward pressure on commodities and plastics should allow AAPL to absorb these iPod lower price points without impacting its margins materially. Arguably there could be room for upside given the lack of pricing change for the iPod shuffle.

AAPL also announced that NBC Universal content will return to its iTunes store including programming from NBC, USA Network, SCI FI Channel, Bravo, Sleuth and NBC News. We view this as a positive that demonstrates AAPL’s market power and ability to negotiate deals. Hit shows include “Heroes”, “The Office”, “Battlestar Galactica”, and “30 Rock”.

We continue to believe that MacBook Pro and MacBook are due for refreshes with more radical redesigns, likely at a special event later this fall. In addition, we are picking up that MacBook Air could see a minor refresh and potential price cut to increase its value proposition as build plans have slowed from earlier robust levels as customers have opted for MacBook or MacBook Pro instead.

We continue to see AAPL as the best play on digital media in the home and a large beneficiary of the shift to mobile computing. In two of its three big franchises, Mac and iPhone, penetration is very low and starting in the higher-income demographics. The disturbance in the macroeconomic environment is within lower-income demographics and financial institutions with exposure and impact to overall liquidity. This could certainly spread, but we believe AAPL’s business will remain strong in the near- to medium-term. Enough high-end consumers are still buying tech, though commodities inflation could pressure future margins."