Steve's alright, right, get over it – and stop shorting AAPL stock 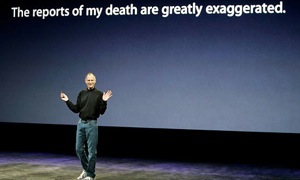 The health of the Apple boss has been in the spotlight for months, with some analysts, investors and media outlets attempting to force the company to issue some kind of statement on the health of America’s most disruptive business leader.

Editors note: We’ve heard from a number of unconfirmed sources (and a friend who is into this sort of thing who is totally  sure) that Jobs is a recent follower of Calorie Restriction dieting.  The main goal of calorie restriction is to lower metabolism and increase longevity.  This kind of "thinking out of the box" diet/medicine is par for the course with Jobs who has a long history of living outside of the norms.  Again, this is just something we’ve been told – we have nothing to back it up.

Now it looks like some of the speculation – based entirely on a fairly standard pattern of weight loss following life-saving treatment for pancreatic cancer – may be being spread about by unscrupulous investors.

Apple has only said the health of the company’s boss is a private matter, and declined to offer much in the way of a statement, other than accepting he was a little unwell during his WWDC appearance.

Peter Oppenheimer recently dismissed any notion the CEO is unwell, saying instead that Jobs loves Apple and has no plans to leave.

And Jobs took time out from his schedule to offer a now-famous off-record confirmation of his hale heartiness with New York Times writer, Joe Nocera.

"This is Steve Jobs,” he began. “You think I’m an arrogant [expletive] who thinks he’s above the law, and I think you’re a slime bucket who gets most of his facts wrong.”

"While his health problems amounted to a good deal more than “a common bug,” they weren’t life-threatening and he doesn’t have a recurrence of cancer," Nocera then wrote.

In an interview after last night’s event with CNBC, Jobs joked that he was underweight, but said there was little more he could do to reassure investors about his health. "I’m doing fine really," he said, adding that he could "stand to gain 10 or 15 pounds."

However, his real invective was off-camera, with CNBC’s Jim Goldman explaining that Jobs attributed his health scare rumors to "unnamed hedge funds" that were shorting Apple stock.

Jobs told him "there is only so much I can do to reassure investors" and that he is "doing just fine" and is "healthy."